Tips for days out in Kefalonia

The bustling port of Argostoli is well worth a visit, any morning you will see the local fisherman selling their catch of the day, you can then take a stroll around the many local shops or just sit and watch the world go by in one of the many coffee shops. 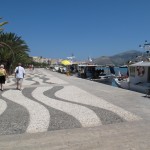 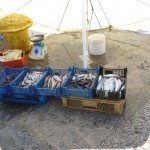 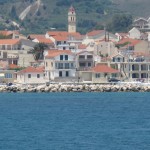 For the more adventurous it’s a beautiful walk or bicycle ride around the lagoon where there are some wonderful views and lots of wildlife to discover. 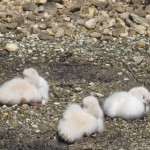 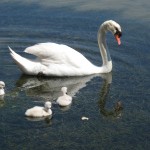 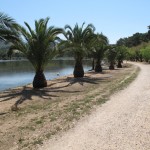 Although the town was rebuilt after the earthquake of 1953, some of its grandeur still remains. Try doing the Volta, or evening walk, (around 7pm till 10pm) along King George II Avenue with local Kefalonians. The avenue leads off the main square northwards and was originally constructed when the island was under British rule as a way of expanding outside the Venetian quarter. Look out for the house of Kosmetatos family on the left hand side (one of the Kefalonia’s wealthy ruling families) which lost its upper floor in the earthquake. To do the Volta all you need to do is to forget your British hurry and walk slowly up and down the avenue imbibing the chat and the atmosphere of this quintessential Greek experience. To appreciate this to the full, you must take your time! Afterwards have a drink in one of the many cafes on the square and let Kefalonia soak through you.

Assos – The Assos Trails (half day) 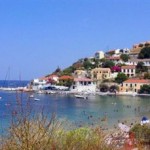 The picturesque port of Assos in the north of the island has been designated a European site of historical interest. Straddling an isthmus of land the harbour lies in the shadow of a giant Venetian Fort. These two trails last about two hours and introduce you the history and folklore of many Assos’ crumbling Venetian buildings. If you are feeling strong, you can walk up to the fortress and into its huge inner compound. If you want to lose the crowds, try half day in Assos with a meal or drink on its plane-tree shaded square. Assos can be reached by bus although you’ll have to walk down the long 4km to the harbour. A hired car is the alternative.

Snow-capped even in early spring, Mount Enos at 1625 metres (over 4,000ft) is the last preserve of the rare Abies Cephalonica fir tree and a small group of wild ponies. Towering over the rest of Kefalonia, these ragged primeval firs give a whole new dimension to the island. It was no accident that the Venetians called mountain Monte Negro – the Black Mountain! Under the Venetians and British much of the island’s tree cover was lost to the shipbuilding industry. Up on Enos, however you can begin to imagine what Kefalonia used to look like 500 years ago. Enos is only accessible by car. In addition to a visit to Mount Enos you could stop off near the villages of Frangata and Valsamata and visit the monastery of Agios Gerasimos, where the patron saint of Kefalonia was said to have spent his monastic life. 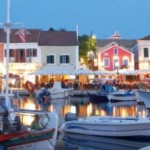 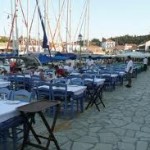 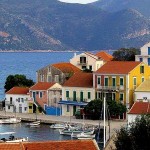 Increasingly more kitsch, this tiny harbour on the northern tip of the island was one of the few villages to be spared by the 1953 earthquake. A site of most ancient inhabitation, Stone Age tools have even been found around the village. More recently a large Roman necropolis, or graveyard, has been unearthed. Increasingly popular with the yachting fraternity, the port is a great place to wander around and take in the sights and sounds of the fast-developing resort. Fiscardo has two lighthouses on the headland; you can walk round to, the old Venetian one, looking like huge stone pepper pot. The sea between Kefalonia and neighbouring Ithaca is also an important area for the endangered Monk Seal (whose numbers are estimated to be less than 20 in this area) and who still cling on to one of its last precious footholds in the Mediterranean. Fiscardo is served by bus from Argostloli. The journey from Argostoli takes well over an hour, but is worth the effort.

It’s hard to imagine another place like Port Merion (in North Wales) with its eccentric Italianate buildings, but that’s Kourkoumelata. Rebuilt by the wealthy ship-owning Vergotis family after the 1953 earthquake. The school, just out of town is built in the style of an ancient Greek temple! The cemetery is also a must for its sumptuous gardens and marble mausoleums. For many years after the earthquake the Vergotis family, who still have property in the village, paid all the electricity and water bills of its inhabitants. Even today (to the best of our knowledge they pay the water bills. And you can see the results in the gardens! After taking a stroll around the village, have a coffee or drink in the Marina Cafe at the top of the village and enjoy the views over the fertile fields of Livatho to the south. Kourkoumelata is regularly served by bus from Argostoli which takes about half an hour.

Combine this trip with a visit to the island’s capital. Kefalonia has a rich past and prides itself in producing Greece’s top philosophers and doctors. With its rich collection of clothes and artefacts, the museum, founded by the wealthy Kosmetatos family, gives an insight into the cultural past of the island and how both rich and poor used to live. The museum also has many photos of how Argostoli looked before the earthquake.

Five kilometres out of Argostoli on the road to Skala you come to the Venetian fort of St George, perched on a dunce’s cap of a hill. The capital of the island until 1757, it acted as the strong hold from invaders and was the place where the ruling families were invited to live. Constrained by its walls, it eventually outgrew itself and was abandoned. At one time a series of tunnels used to link the fort with the sea and it is said that the few Italian soldiers who survived the Nazi firing squads when Italy changed sides in WW2, did so by being led to safety through the tunnels. Hidden in the thickets of marquis and scrub, the massive Cyclopean walls of Krani are proof of Kefalonia’s ancient inhabitation. The walls stretch for over two kilometres and can be found just outside Argostoli on the hillside behind the lagoon and just past the stadium. Mycenean tombs have also been found in the area which is the same period in which the seafaring Odysseus is said to have lived. Spend a morning or evening looking for the ruins and looking out for the wildlife of the island. Don’t forget to carry water and wear long trousers and stout shoes. A taxi can be arranged to drop you off and pick you up. Alternatively you could cycle or walk there.

The Caves of Drogorati and Melissani (half day) 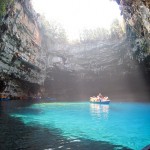 Drogarati cave is situated in the north of the island, about a couple of kilometres outside Sami, on the road that leads to Argostoli. Spileon Drogarati, or Drogarati cave, is a huge underground cavern – thirty meters by forty-five! The ceiling of the cave us hung decorously with innumerable stalactites and the floor littered with stalagmite’s which really does look amazing! Melissani can be found about three kilometres outside of Sami, heading north on the road to Agia Efimia. The left turning to the cave is clearly marked. A little tunnel leads you underground and brings you to the edge of a subterranean lake, Lake Karavomilos. Your guide will take you on a tour of the cave in a rowing boat, which takes about half an hour. In antiquity, the islet in the middle of the lake was a sacred place, used to worship Pan, the half man, half goat demi-god. Where there is no rock overhead, the light pours in to reveal deep turquoise and sapphire-coloured, sparkling waters, and there is a story, too, for the turquoise water. Dye tests were placed in the water at Katavothres, Argostoli, to see what happened to the water as it disappears underground there, that ran the old Sea Mill. The dyed water was found to surface here at lake Karavomilos, meaning that the water had run through subterranean tunnels across the full width of Kefalonia!